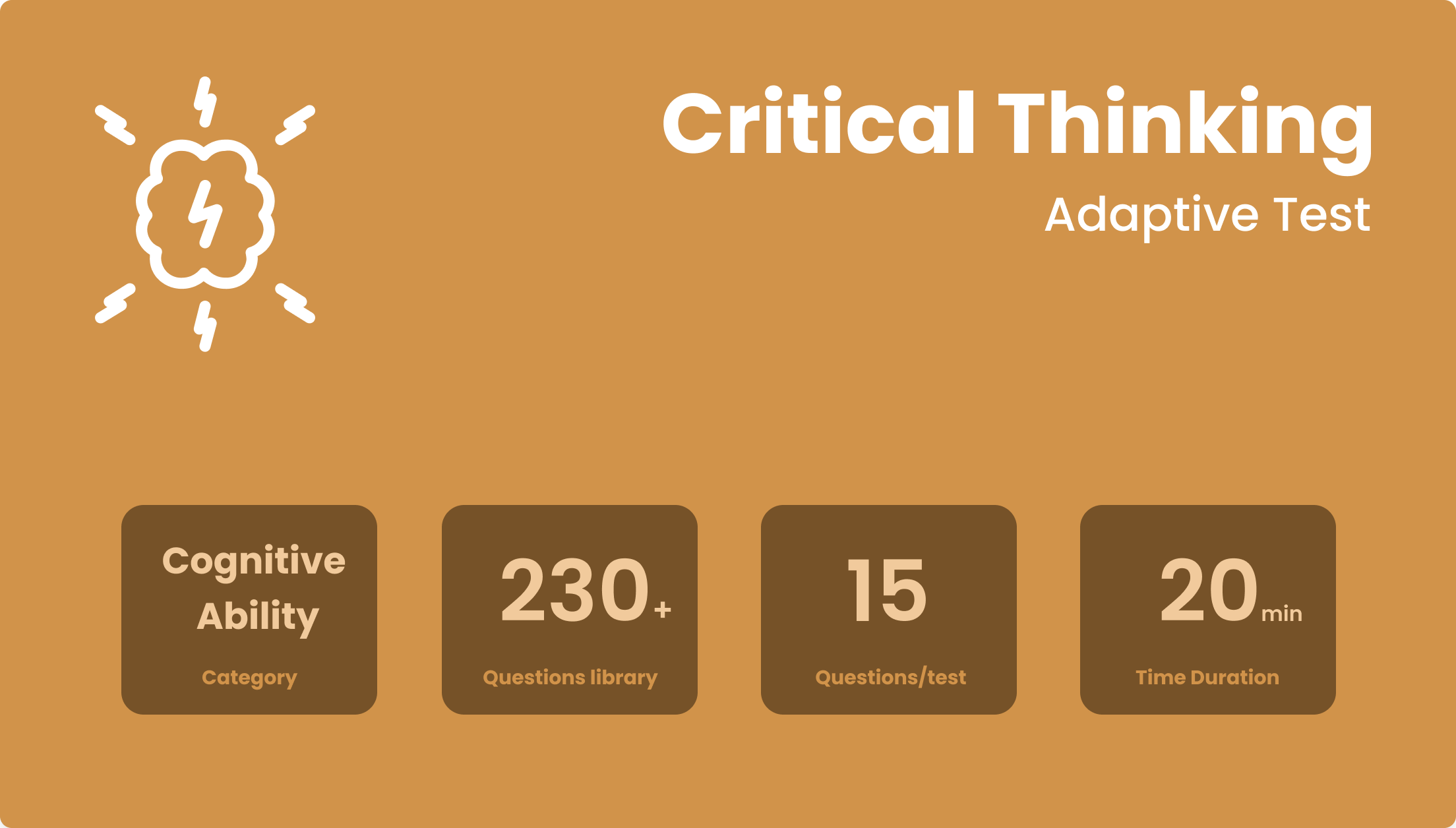 The critical thinking test assesses the candidate’s ability to look at the premise and clearly understand it from multiple perspectives, separate facts from opinions and assumptions, analyze an argument and reach conclusions, develop and consider alternative explanations, and reason from incomplete patterns.

The test is an adaptive test that varies the difficulty of the questions based on the current performance of the candidate, thereby zeroing in on a fairly definitive numeric measure of the candidate. The result of this section is given in percentiles, relative to the whole test pool population of Merreo.

What does this section measure?

Where to use this test?

This is a high level test; high levels of literacy and English skills required. Please avoid using this test for lower level job openings. Also don't use this test along with "English Intermediate". Please use our data-driven pre-sets for best results.

These types of questions have one prompt and 4 to 7 sub-questions. Each question will be a multiple-choice question with exactly one correct answer.

There are exactly six groups in this year's Independence Day parade: Army, Navy, Air Force, Coast Guard, Special Forces, and Police force. Each group marches as a unit; the groups are ordered from first, at the front of the parade, to sixth, at the back. The following conditions apply:

Question 1) Which one of the following could be an accurate list of the groups in the Independence Day Parade in order from first to last?

The first is to understand the constraints given in the question and apply them to the list. Then go with the process of elimination. Look for answers that deviate from the rules.

Answer choice (A): This answer is eliminated by the first rule. In this instance, there is only one group separating the Special Forces and Coast Guard.

Answer choice (B): This answer choice is eliminated by the third rule. In this answer, there is no group between Army and Police force

Answer choice (C): This answer is eliminated by the third rule because the Navy marches fourth.

Answer choice (D): This is the correct answer.

Answer choice (E): This answer violates both the first and second rules.

Question 2) If the Navy marched immediately ahead of the Police force, then which one of the following could be the fourth group?

Answer choice (A): Under the condition in this question, the Navy must march third.

Answer choice (B): Under the condition in this question, Air Force must march fifth or sixth.

Answer choice (C): Under the condition in this question, Coast Guard must march fifth or sixth.

Answer choice (D): Under the condition in this question, Special Forces must march first.

An inference is a conclusion that you can draw from certain observed or supposed facts. But inferences may or may not be correct.

For example, you can infer that people are in the house by looking at whether the lights are up, but the people of the house might have left the light on and left the house. This inference is probably correct but not correct in all cases. Each question starts with a prompt that you have to treat as facts.

One must not bring in his/her previous knowledge or common sense when evaluating the inferences. All the questions will have the same 5 choices (True, probably true, Insufficient data, probably false, false).

True – When the inference is definitely true based on the prompt. The inference flows from the facts given

Insufficient data – If you cannot decide anything about the inference. There is no basis to judge whether an inference could be probably true or probably false

False – When the inference is definitely false. Inference contradicts or misinterprets the provided facts

Turkey is a surprising addition to the list of rapidly developing economies, with a GDP increase of 8.5%, in the year 2011 alone. However, such rapid growth leaves worry regarding possible side effects. For instance, in 2011 Turkey’s rate of inflation was well above that of its peers. Secondly, there is increasing concern regarding Turkey’s growing dependency on foreign capital. A large portion of the Turkish banking system is part-owned by banks in the Eurozone. As the single currency falters, such a dependency raises questions about the stability of Turkish growth.

Inference 1) There are concerns that Turkey’s development is at risk of faltering in years after 2011.

Because the information is explicitly stated in the prompt

Inference 2) As Turkish banks are part-owned by those in the Eurozone, they may suffer if the European banks face financial difficulty.

Argument critical thinking questions ask you to analyze a given argument and to recognize such things as factors that would strengthen or weaken the given argument. You have to analyze the reasoning errors committed to making that argument.

These types of questions come with a paragraph and a single question from it. The question will have five answer choices and only one will be correct.

Attempts to blame the Yorktown mayor’s policies for the growing inequality of wages are misguided. The sharp growth in the gap in earnings between college and high school graduates in this city during the past decade resulted from overall technological trends that favored the skills of more educated workers. The mayor’s response to this problem cannot be criticized, as it would hardly be reasonable to expect her to attempt to slow the forces of technology.

Question 1) Which of the following, reasons if true, casts the most serious doubt on the defense of the Yorktown Mayor by the author of this editorial?

A. Rather than cutting the education budget, the mayor could have increased the number of staff and funding devoted to locating employment for graduating high school seniors.

B. The mayor could have attempted to generate more demand for products from industries that paid high blue-collar wages.

C. The mayor could have initiated policies that would have made it easier for less-educated workers to receive the education necessary for better-paying jobs.

D. Instead of reducing the tax rate on the wealthiest earners, the mayor could have ensured that they shouldered a greater share of the total tax burden.

E. The mayor could have attempted to protect the earnings of city workers by instituting policies designed to reduce competition from foreign industries.

Explanation – The Author of this editorial claims that the Mayor has no fault in the happening and you must look for answers that reasonably claim that the mayor is at fault.

Answer choice (A) – This choice sidesteps the wage issue as more employment of high school graduates does not decrease the wage disparity.

Answer choice (B) – This choice utilizes “Blue-collar workers” interchangeable with “less educated” workers. This logical leap is not strongly warranted in the argument.

Answer choice (D) – It only discusses the taxes and avoids discussing the wage issue. So this is irrelevant

Answer choice (E) – This choice is also irrelevant since it talks about the protection of wages of “city workers” and completely avoids discussing the wage issue.